First of all, let’s explore the origins of the word “Jacobean.” The Jacobean era refers to the period in English and Scottish history that coincides with the reign of King James I (1603-1625) of England, who was also James VI of Scotland. Although named for James I, the Jacobean period is thought by some historians to have extended throughout most of the 17th century.

The Jacobean style is characterized by English, early Renaissance architecture and decor. It formed a transition between the Elizabethan (Tudor) and the pure Renaissance style later introduced by Inigo Jones, and was characterized by very “sturdy furniture, which was usually massive in size, notoriously uncomfortable, and made to last.”

This era was a busy time for the United Kingdom and for America. England and Scotland became unified under one ruler (although the Acts of Union were not signed until 1707), and almost simultaneously Britain began to colonize the North American continent. Jamestown, Virginia was founded in 1607; Newfoundland in 1610; and the Plymouth colony in Massachusetts in 1620.

There was also some unrest in England. When James came to power in 1603, English Catholics thought they had a sympathetic ear in their new ruler whose mother Mary Queen of Scots was a professed Catholic. They soon found out that the opposite was true: On November 5, 1605, a group of English Catholics attempted to blow up the King and his protestant peers in Parliament in the Palace of Westminster. Known as the Gunpowder Plot, the scheme failed, and the conspirators were hanged, drawn, and quartered. The most famous of these in later generations became Guy (Guido) Fawkes, who was not even the leader—just the explosives expert! Britain still celebrates Guy Fawkes Night every year on November 5th with fireworks, bonfires and hangings in effigy of Mr. Fawkes.

This was also a time of great literary works, including Shakespeare’s The Tempest, King Lear, and Macbeth, as well as some powerful works by John Webster, Ben Jonson and Francis Bacon. The King James Bible was also printed during this time.

Interestingly, this era also heralded the widespread use of tobacco in England. By 1612, London had 7000 tobacconists and smoking houses! As it turns out, this was probably instrumental in creating the America we know of today, as the survival of the Virginia colony depended principally on England acquiring the nicotine habit.

Unfortunately, the Jacobean era was plagued with a severe economic depression from 1620-1626, an outbreak of bubonic plague in London in 1625, and finally, the bloody English Civil Wars from 1646-1651. The English Civil War resulted in the overthrow of the monarchy and the rise of parliamentary government, as well as the trial and execution of Charles I, and the exile of his son Charles II. 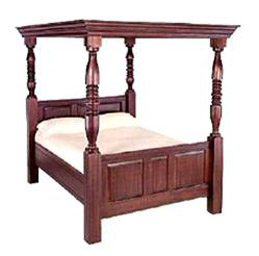 The Changing Face of Furniture

The Jacobean era can be broken down into three different periods of influence. The earliest Jacobean furniture was influenced mainly by Elizabethan furniture, characterized by heavy ornamentation, scrollwork, thick columns, arches, and massive size.

After the overthrow of the monarchy in 1651, and during the reign of Oliver Cromwell as Lord Protector, furniture took on a simpler, puritan look and feel. This was known as the Commonwealth style, referring to the system of government in the United Kingdom at the time, and marks the middle of the Jacobean period. It was characterized by a utilitarian look, with applied moldings and simple, straight turnings.

When Charles II returned from exile in 1660, the Puritan severity of the Commonwealth, or “Cromwellian” style was replaced by a taste for magnificence and opulence, and heavily influenced by Flemish Baroque design. This was known as the Carolean, or Restoration period, and was evidenced by “the use of floral marquetry, walnut in place of oak, twisted turned supports and legs, exotic veneers, cane seats and backs on chairs, sumptuous tapestry and velvet upholstery, and ornate carved and gilded scrolling bases for cabinets.” 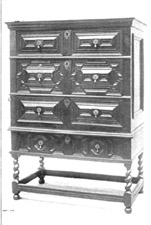 As a rule, Jacobean furniture construction was kept simple: assembled with mortise and tenon joints, and held together with pegs. The majority of lines were square and rectangular, most with flat-fronted surfaces. The art of inlay and veneering added a wonderfully ornate look, especially in cupboards and cabinets. Many pieces were painted, which further added to the style of the piece.

(The following passages are derived mostly from the Buffalo Architecture and History website: http://www.buffaloah.com/) 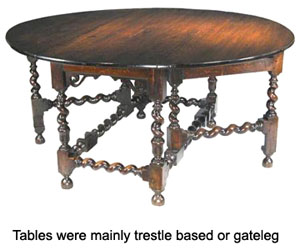 This earliest distinguishable American style was derived from Renaissance and 17th century English models. English furniture was massive, rectilinear, and usually made of oak. Since oak was plentiful in America, the English immigrant colonists used it to make similar forms. Pine was sometimes employed for concealed elements.

Like 17th-century English furniture, Pilgrim-style furniture (as it is called, although little of it was made by Pilgrims) was simple, strong, massive, and rectilinear. Pilgrim style is primarily a Renaissance style with some Baroque influence, although the rest of Western Europe, not suffering from civil war as was England, was enjoying lighter and more comfortable furniture.

Many case pieces were composed of grooved stiles and rails that formed a frame into which panels were set. The panels usually had carved decoration. Many of these early pieces were painted, but few today have traces of their original paint. The most common case pieces executed in the Pilgrim style were chests and Bible boxes, and the massive court and press cupboards that only a few wealthy individuals could afford. 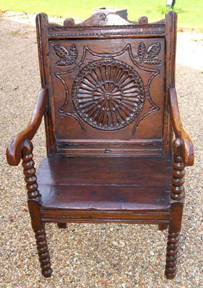 Chairs were comprised often of posts and spindles with rush seats or had hard slat backs. Typical was the Wainscot chair, which, with its solid back and columnar turned legs, was based on Elizabethan models. Brewster and Carver chairs (made with numerous spindles filling their straight frames) were also produced, their names taken from two distinguished American colonists of the period.