An English cabinet-maker and furniture designer of Mid-Georgian, English Rococo, and Neoclassical styles, Thomas Chippendale was born at Farnley near Otley in 1718. He apprenticed with his father John Chippendale in West Yorkshire and probably with Richard Wood, but little is known of his early career. Although a canny businessman and social climber, Chippendale was never fully accepted into British high society except in his trade and professional capacity. In addition to being a talented cabinet-maker, Thomas Chippendale was also well regarded as an interior designer. Typically, Chippendale only took on large scale commissions for well heeled, aristocratic clients.

In 1754, Chippendale became the first cabinet-maker to publish a book of his designs, titled The Gentleman and Cabinet Maker's Director. The book was written as a catalog from which his wealthy patrons could pick and choose particular elements for their furniture, but soon became so popular with his patrons that other furniture makers began to use it as a pattern book for their own shops. It is obvious from the public records that Chippendale's career greatly benefited from the publication of this book, as almost all of his large commissions took place after it was published.

The Gentleman and Cabinet Maker's Director contained four main design styles: English, with deep carving; French Rococo, consisting of lighter forms and curvilinear lines in the style of Louis XV; Chinese, with latticework and lacquer; and Gothic, with pointed arches, quatrefoils and fretwork legs. Chippendale combined elements of all of these styles to produce his own unique furniture. Contributing to this uniqueness was Chippendale's own preferences: his wood of choice was mahogany, and he eschewed veneer in favor of carvings and latticework.

Chippendale retired when his son, Thomas Jr., took over the business in 1776. In 1779, Chippendale movd to Hoxton where he died of tuberculosis, and was buried at St. Martin-in-the-Fields on November 13, 1779. If you travel to London, stop by the Victoria and Albert Museum to see a life-size sculpted figure of Chippendale on the facade, and reflect on what a profound effect this one man had on the design of furniture. 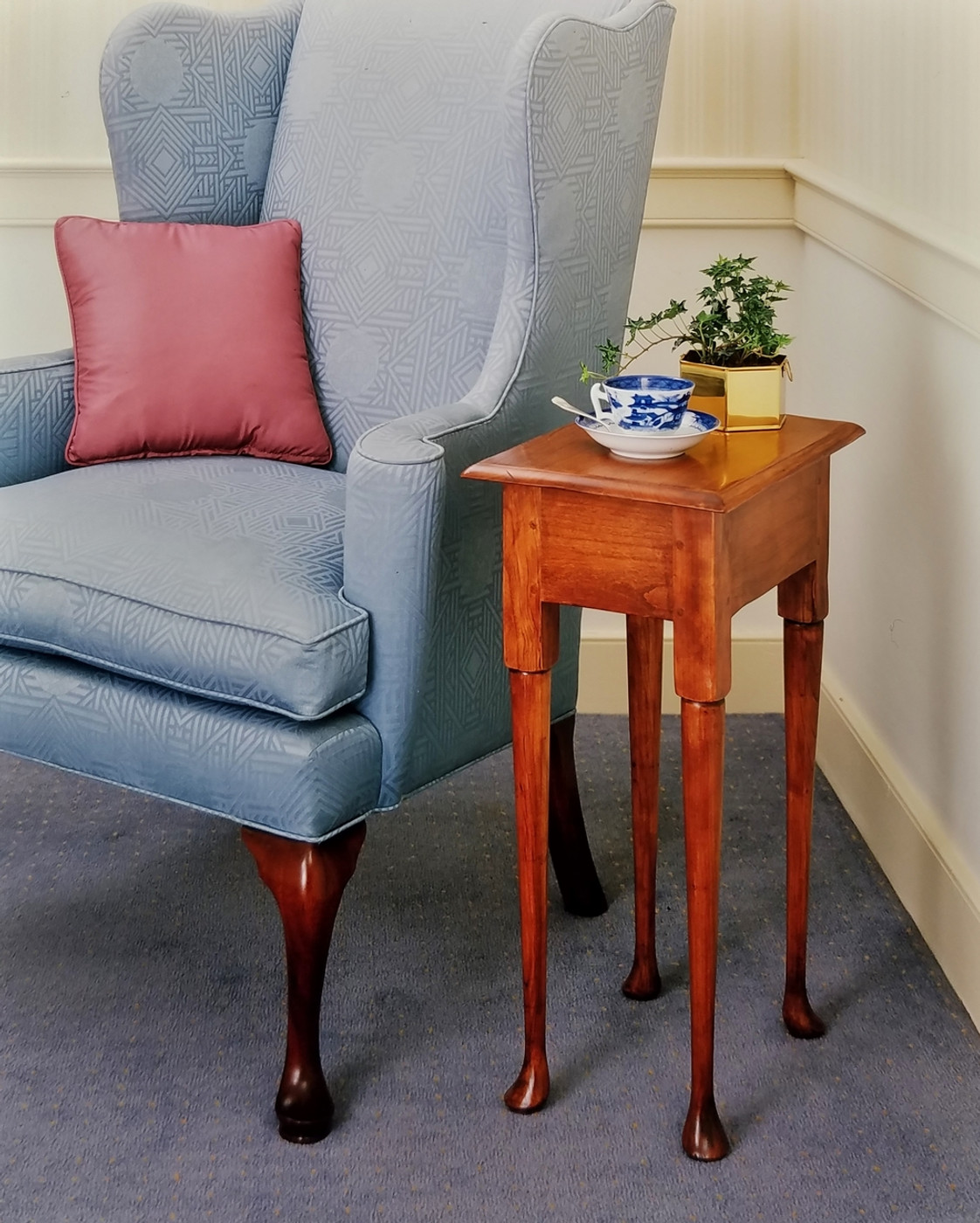 The Chippendale style did not reach the colonies until about 1755, after The Gentleman and Cabinet Maker's Director was published and reached American shores.

As with all other periods of furniture, classic elements of previous periods were retained, built upon, and combined with the new. Broken pediment, pilaster, and classical entablature remained essential parts of Chippendale furniture, even as new elements were added.

The Chinese influence in Chippendale furniture manifested itself in two ways. During the Chippendale era much was being imported from the Orient, and elements of Chinese furniture were copied and adapted to European furniture. At the same time, skilled artisans of the West were being inspired by these designs to new interpretations, called chinoiserie.

Gothic influence can be seen in many Chippendale pieces and includes tall pointed arches, clustered columns, and lancet arches. In many pieces, the Gothic framework was often used as a skeleton to build upon, and these elements were so blended with Rococo and Chinese forms that it is difficult to distinguish them.

Chippendale's signature form was the cabriole leg, an elegant, serpentine style ending in a distinctive foot, which he employed extensively. Though there are six different basic Chippendale style legs—the lion's paw, the ball and claw, the late Chippendale, the Marlborough, the club, and the spade—three of them are based on this cabriole shape. These include the lion's paw, which ends with a lion paw shaped foot; the club, which is a simple round foot; and the ball and claw, which looks like an eagle talon holding a ball. 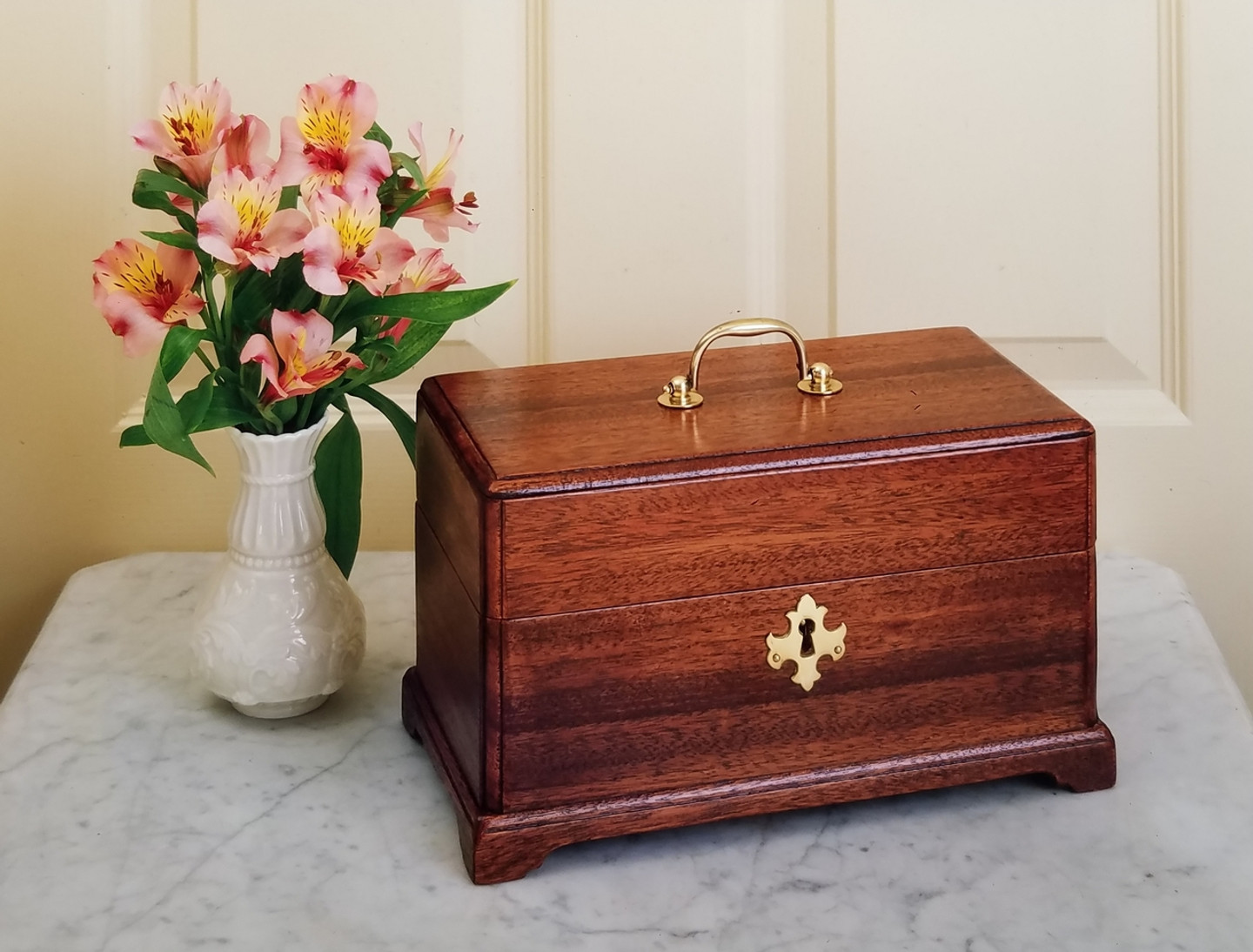 As was the case with other furniture periods, regional characteristics were highly pronounced in American Chippendale furniture. Although mahogany was the usual wood of choice, Connecticut cabinet-makers used cherry more often, while furniture makers in Bermuda used local cedar which had an orange hue. Throughout America, furniture makers used softwoods like white pine for the main carcass of furniture, while back in England, they favored hardwood such as oak. Though too numerous to cover completely in this article, here are just a few of the regional characteristics that are noteworthy:

Massachusetts furniture was conservative and slower to change than other areas. Holdovers from the Queen Anne period, such as the block-and-spindle stretcher and the slender and highly refined cabriole leg were typical of the area. The most ambitious innovation of Massachusetts furniture was the "kettle" or "bombe" form on case furniture, which involved bulging front and sides fashioned from a single piece of wood.

In Newport, Rhode Island, three generations of the Goddard and Townsend families made furniture styles ranging from Queen Anne to the Empire style. Their unique contribution was the shell casework reminiscent of the Rococo period.

Connecticut's contribution to the Chippendale style includes carved sunburst or pinwheel patterns, and the more sophisticated latticework pediments and scallops on the skirts of case pieces. Cherry wood was plentiful in Connecticut, which made it the wood of choice there.

New York furniture remained conservative, as in Massachusetts, and Rococo ornamentation saw little use, at least in the early Chippendale years. Chippendale influence could be seen in the gadrooning and Gothic motifs of New York card tables; on the whole though, New York furniture was generally square, heavy, and somewhat squat. New York Chippendale furniture is known chiefly for its tables, chairs and benches, and the distinctive New York claw-and-ball foot had talons closely grasping a squarish ball.

By the late 1780s, much of Philadelphia furniture contained details taken directly from Chippendale's Director, such as the French scrolled foot. Philadelphia cartouches were highly developed, and the claw-and-ball foot was carved with highly articulated talons. The cabriole leg was often carved with an acanthus leaf and sometimes included a hairy paw foot. One of the most famous cabinet-makers of the day was Thomas Affleck (1740-1795), a Philadelphian who was also an exponent of the Chinese Chippendale style. Philadelphia's influence extended to Maryland as Baltimore would not become an important port until after the revolution.

Charleston, South Carolina was an active woodworking city, and produced "sophisticated furniture closely related to English prototypes" of Chippendale furniture. Charleston generally used mahogany as a primary wood and walnut as a secondary wood, even though walnut grew in the South in great variety.

Tea drinking became very popular throughout the American colonies. Several new Chippendale furniture forms can be attributed to this: The kettle stand, which contained a small, easily movable slide to hold a teacup; the China table, used to hold the tea service; and the elaborately carved "piecrust" tilt-top tea table.

One of the most interesting innovations of the period was the Pembroke table, a breakfast table with short leaves, often containing a drawer. These were often built in the Chinese style with beautiful fretwork, and later included inlay work on the legs, drawer front and top.

Candlestands were developed during this time, and "blocking" and bombe were both important aspects of the Chippendale period. The "breakfront" was "a highly architectural piece conceived in several sections, with bookcases, a desk, and closed cupboards.